So first off, I’d like to say thank you to everyone who sent in questions for the Q&A video.

It’s live now and you can see it here.

For those of you who have issues with barre chords, pain in the hands, finger independence or picking, I encourage you to check it out.

There is much to learn from other players’ questions and I hope you enjoy it.

Now, on to the newsletter:

If you write your own music, or like to improvise then mastering this one single trick will change how you think about chords forever.

I must warn you that it’s only the tip of the iceberg… and if you explore further, you might just get hooked on the sounds of these chords!

We’re talking about inversions and how to use them.

Simply put, inversions are a way of rearranging the notes in a chord so that the root note isn’t the bass note.

All those chords you learn when you’re starting to strum along to songs…chords like C, G, Em, D, F etc. are all in root position.

This means that the root note of each chord is the lowest note in that chord.

An inversion is when you take another note in the chord and make that one the lowest note.

For example in a C chord there are three notes: C-E-G. Normally, the C is the bass note, but you could easily make E or G the bass note.

You’d probably have to figure out a new way of playing that chord but the sound you’ll get will forever change how you create and play chord progressions.

Maybe the most common inversion is also the one that often sounds the best…Using the 3rd as the bass note.

Let me be clear, this isn’t something that should be done on every chord, but instead is a tool that can be used to enhance voice leading within a progression.

Voice leading is when the various notes within a chord progression move up or down in a linear fashion to create melodies. (There is much more to it than this, but this is a basic definition).

Notice how the bass note jumps from C on the first chord to G on the second? It then descends in a scale: G-F-E following the chord progression.

Those three notes that descend in a scale are an example of voice leading.

Take a look at the highest note of each chord too. They form a little melody as well.

However, if you begin to use the inversion with the 3rd in the bass it can make that voice leading even better.

3rd In The Bass

If we change that progression by using the 3rd in the bass we can have voice leading for all four chords, instead of just three. 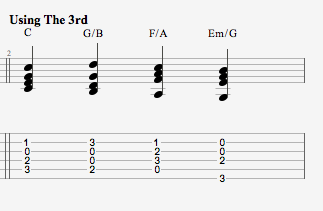 Now the voice leading in the bass goes: C-B-A-G.

It flows along in a scale from C down to G by using the 3rd as the bass note of the G, F and Em chords.

The inversion is represented in the chord symbol with a slash.

G/B means that it’s a G chord, but B is the bass note…the same is true for the F and Em chords.

Obviously you have to know what notes are in a chord to make inversions work, but once you do there is no limit to how you can improve the voice leading in a progression.

Often times, it’s most effective to keep the new bass note on either the 6th or 5th string. That way it sounds more like a bass note, and doesn’t get covered up with the mid range tones on the 4th string.

In order to do that it’s common to skip the 5th string when putting the bass note on the 6th string.

Our new progression is: Cmaj7-G7-Fmaj7-Em7

Here the bass and the highest note create new melodies that highlight the voice leading.

The bass descends in a scale: C-B-A-G, while the high notes change direction: E-F-E-D.

This is clearly only one example, but the concept can be exported to any progression you write or play.

In fact, if you start incorporating more complex chords you’ll find that putting the 3rd in the bass not only offers you more options for voice leading, but it also can improve how to see and navigate the fret board.

Attached is a list of 7th chord inversions for maj7, dom7, and min7 chords on each string.

There are of course many other ways to play these inversions but these are very common.

So far we’ve focused on the 3rd in the bass and not the 5th or 7th.

Take what we’ve discussed so far about putting the 3rd into the bass and see if you can figure out a way to play these other two inversions.

In the end you should have four inversions per chord on each bass string.

It’ll challenge you and lead you to new places on the neck and new opportunities for writing/playing chords.

Learning new ways of playing chords with inversions is one of the most effective ways of becoming fluent on the fretboard, while simultaneously improving your musicianship skills.

Take some chord progressions you normally play and try to rework them using the 3rd in the bass for some of the chords…see what you come up with.

It just might be one of those “light bulb moments”.