Pressure On The Pick

This may seem like a mundane topic, but taking a close look at how you hold the pick is a valuable lesson for anyone looking to improve their picking technique.

There are many things that go into making a great picker, but it all starts with the grip you use.

When you hold the pick it is most likely you do so between your thumb and index finger. This is the most common way to hold it, and the way that allows for the largest optimization of technique.

Anatomically, there is an advantage to holding the pick between your thumb and index finger.

These are the two most powerful and dominant fingers in your hand and also have the largest range of motion and independent variability. When holding the pick between these two, the amount of pressure put on the pick will have to vary depending on what you’re playing.

The advantage to using these two fingers is the level of control you have over the pressure on the pick.

The thumb and index finger are inextricably linked anatomically, due to the need for humans to be able to pinch things using only two fingers. Because of the biological ability and need to pinch, humans have a specific muscular coupling only found in these two fingers.

As you apply pressure on the pick with your thumb, the index finger naturally applies pressure in the opposite direction. They are both moving toward each other, applying similar levels of pressure to the pick.

If you are to relieve pressure in one of the fingers, the other finger will make up nearly the exact same pressure in order to maintain the grip on the pick.

This back-and-forth pressure between the thumb and index is incredibly valuable to players who seek to improve their picking.

Ideally, you’d like to have one of two scenarios occur while playing:

1) Maintain an equal level of pressure between both fingers.

Useful for a large variety of picking and strumming techniques, an equal amount of pressure allows you to play down and up strokes in a symmetrical manner. This means that because the pressure on the pick is not changing, the pick angle is necessarily staying constant. By keeping the pressure the same in both fingers you can drive the pick through the string either downward or upward with the same level of force, producing an equally loud and vibrant tone. In a blind test, the listener should be unable to distinguish between a down stroke and an up stroke if the pressure is equal between both fingers.

2) Vary the pressure applied by the thumb and index finger.

By changing the pressure applied by either the thumb or index finger you inadvertently change the angle of the pick. Pressure can be applied by the thumb through bending the middle knuckle inward. Bending this knuckle inward (Fig. 1) puts more pressure on the outside of the pick and causes it to angle downward in a slicing motion through the string, especially effective for long, “sweeping” motions through the strings. Used often by shred players who play using economy picking, this technique can be very effective for fast playing. 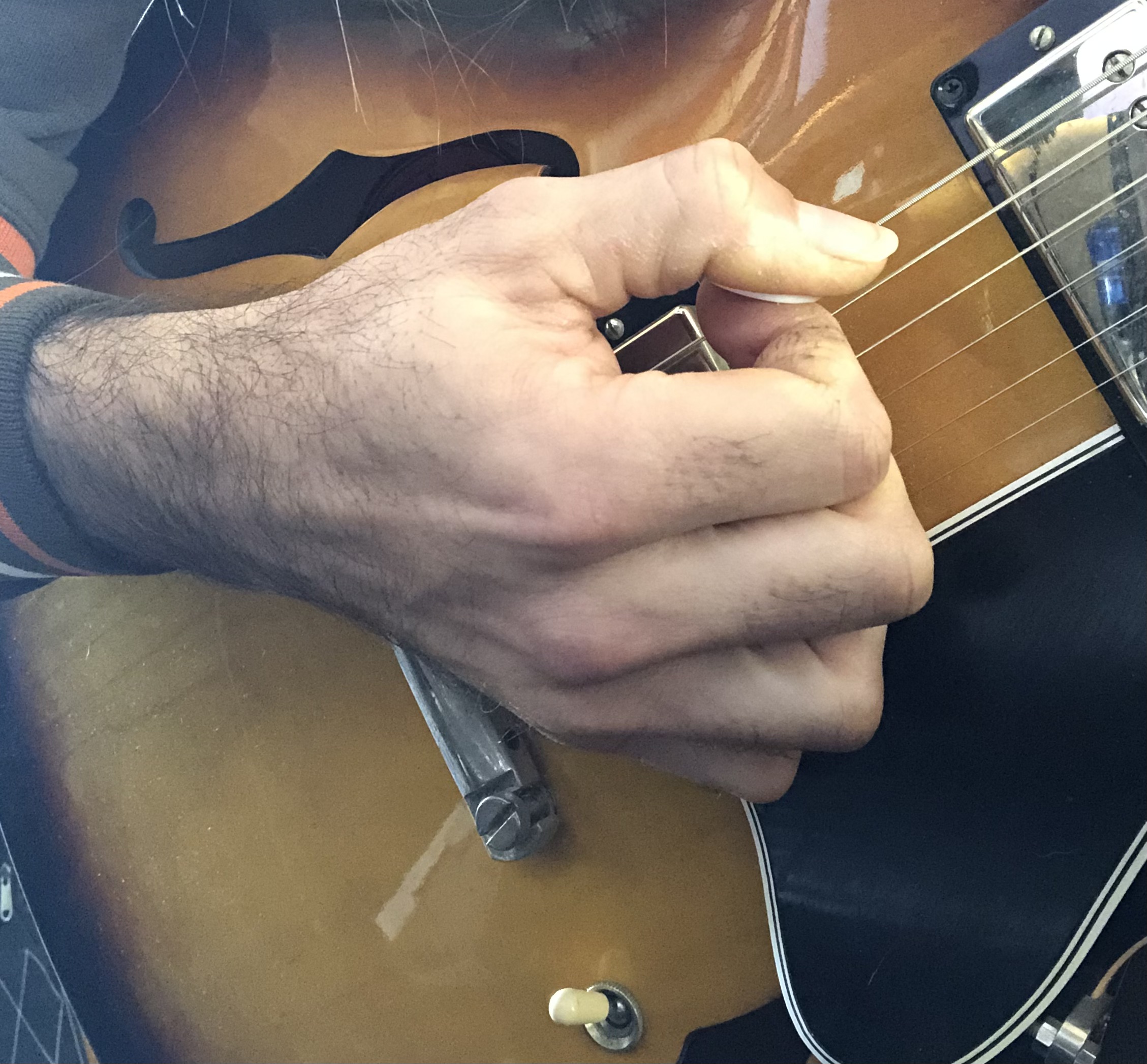 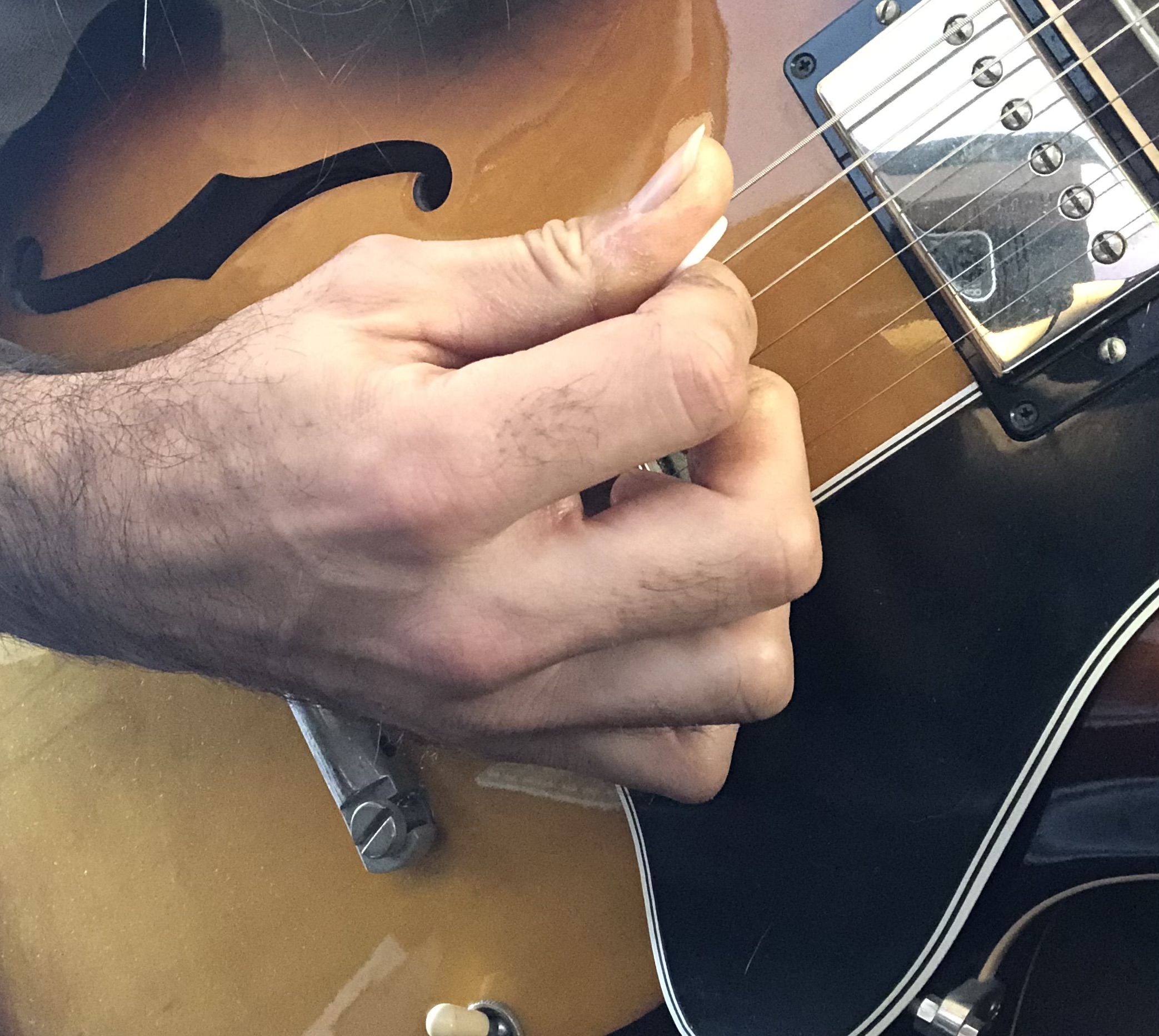 Many players actually vary the pressure between fingers for every stroke. You can see certain players constantly bending and straightening their thumb. This creates movement of the pick through the string that is almost entirely derived from finger motion with little to no wrist involvement.

It goes without saying that we would benefit from being able to use both of these methods of picking with ease.

There are times when playing with equal pressure will allow a faster and more controlled alternate picking movement, with a more uniform volume between down and up strokes.

There are also times when varying the pressure between fingers will be a large advantage.

Such is the case with sweep picking, repeated down picking, accenting certain notes within a phrase and many more scenarios.

Ultimately, as with all things picking related, it is you who must decide the most ideal and natural form for picking, depending on the specific motion at that time and the style of music you are playing.

However, what is necessary for improvement is that regardless which of these two methods you are using, paying close attention to the pressure between the index finger and thumb will ultimately lead you to being far more accurate.

Noticing small variations will allow you to gauge at which specific level of pressure you can play optimally.

If you are applying equal pressure, then how much is being applied? Are you squeezing with all your strength and using 100% of your available pressure? Or are you barely hanging on to the pick by applying 10% pressure equally in both fingers?

These are very important questions to ask yourself. Using the answers to analyze the ideal way in which you attack a string or chord will give you great insight into the flaws in your picking, which hopefully will lead to you addressing those flaws.