Do you find yourself repeating the same licks over and over again?

Or maybe running into the same dead-ends as you solo?

The Coltrane pentatonic is an awesome way to take your standard minor pentatonic scale, tweak it a bit and achieve a vast array of new licks and ideas that were completely unknown to you before.

What Is The Coltrane Pentatonic Scale?

Named after John Coltrane, the legendary jazz saxophonist, this five-note scale is immensely useful for all genres of playing.

This is the scale everybody really knows and plays regularly.

The Coltrane scale varies it by just two small changes…

The addition of the 2 and 6 create a whole new world of possibilities, especially if you can learn to see these new notes in the position you currently play the standard minor pentatonic scale.

Using this new scale allows you to minimize the amount of thinking you have to do while playing over more complex chords then you’d normally find in A minor.

The A minor pentatonic scale is a diatonic scale, meaning that every note within it occurs in the key of A minor.

The difference with the Coltrane pentatonic scale is that it incorporates the raised 6th (F# in the case of A minor).

This means it is not diatonic to the key of A minor, because A minor has no sharps or flats.

Instead, this single F# comes from the key that has only one F#: they key of G.

This makes the Am Coltrane pentatonic a 5-note version of the A Dorian mode.

(More info about modes can be found here)

This addition of an F# to a scale that normally has no sharps opens up the possibilities as to the types of chords you can play over.

Ever run into a two-chord progression with these two chords: Am-D9?

Most likely you have, because it’s one of the most common progressions in blues-rock.

If you’re using the Am pentatonic scale to solo over that you’re going to continuously find that you’re not getting the best phrases over the D9.

If you’re playing that G as part of your pentatonic scale then you’re going to be a half-step away from the 3rd of the chord…making for a very dissonant and “wrong sounding” note.

By switching to the Coltrane pentatonic you can attack that F# with ease and avoid the G altogether.

There are a host of other chords that are commonly found in combination with Am that would benefit from the Coltrane scale. Here are some of the most frequently used ones:

These chords are obviously additions to the chords that normally work with the standard Am pentatonic scale such as:

All of these chords put together paint a picture of the possibilities over which the Coltrane scale can be played.

However, there are many more “extended” and complex chords that can be played along with this new scale:

As you can see, these two small changes in the Coltrane scale yields a much larger array of chords over which a simple five-note pattern can be played.

Getting Used To The Scale

After years of playing the standard Am pentatonic scale, it can be challenging to try and “see” this new pattern, and even more challenging to incorporate it into your playing.

I’ve found that the best approach is to take simple Am pentatonic licks that you already know and tweak them so they fit within the Coltrane scale.

For example, if you have an Am blues lick that uses the note G as part of the Am pentatonic scale, simply replace that G with an F# and see how that changes the sound of the lick.

Here is a great example: 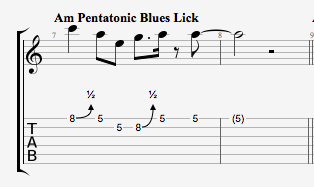 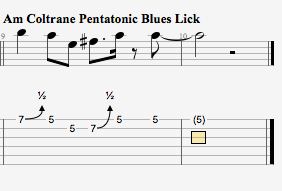 In another example using the intro lick to “Born Under A Bad Sign” by Albert King can be altered to create an entirely different sound by substituting the 4 for the 2 and the b7 for the 6.

In this example, the original is in C#m pentatonic and in the altered version it’s using the C#m Coltrane pentatonic.

I encourage you to experiment and test the waters using this scale. You’ll quickly see that you can move from the standard pentatonic to the Coltrane pentatonic within a solo and achieve an amazing level of question and answer style phrasing.

You don’t have to simply stick with one scale for an entire solo, but rather jump in and out of various pentatonic scales to expand your musical horizons.