How To Use Passing Chords

Have you ever heard piano players or guitarists who seem to use tons of chords while they’re playing over a standard song like a blues?

Well what they’re doing can be thought of in terms of passing chords.

When you have a standard chord progression (and it can really be any progression you’d like) there are numerous ways of injecting chords between the written chords that can add a lot of flavor and sophistication.

The use of passing chords is an excellent way to create tension and release and can even be used to bring solos or lead sections to a more heightened level.

By becoming a great chord player, you ultimately become a better player overall.

What Are Passing Chords?

Simply put, passing chords are chords that are used to “pass” from one chord within a progression to another.

A passing chord could be placed in between the first two chords (C-F).

Sticking within the key of C you might play C-Em-F. By injecting that Em chord you use the Em passing chord to create the sense of climbing up into the F.

Now this must be done so that the use of the passing chord doesn’t make the progression fall out of time.

If each of the chords in the original progression receive one full measure, then placing that Em somewhere within the first measure would allow the F to still land on beat 1 of measure two.

This use of a passing chord within the key is called a “Diatonic Passing Chord”.

Diatonic means “within the key”. So by using diatonic chords to move between chords within a progression you can add various upward or downward movements to your playing.

In fact you could use any number of chords in sequential order within the key to get from one chord to the next.

In between C and F there are the chords Dm-Em…both can be used as passing chords.

Within F and G there are no diatonic chords since they are right next to each other within the scale.

But between the last two chords G-C there are two diatonic chords: Am-Bdim.

This means you could inject a total of four diatonic passing chords within the original progression. It would look like this:

It would change the overall chord progression from I-IV-V-I to: I-ii-iii-IV-V-vi-viiø.

All of this diatonic passing chord movement can be done with more than triad chords. You can use any combination of triads, seventh, ninth or other extended chords within the key.

One of the greatest chord hacks in music is the use of diminished 7 passing chords.

These are non-diatonic chords, meaning they don’t occur within the key.

Diminished harmony is a long and complex subject (far too long for this one article), but essentially diminished chords can “tonicize” any chord a half-step above.

Diminished 7 chords are four-note clusters that are symmetrically built.

This means that each note within the chord is a minor 3rd (three half-steps) away from the next note.

The interesting thing about this symmetry is that you can move one shape of a Dim7 chord up three frets and it will be the exact same chord in a different inversion.

Doing some quick math, that means that if there are four positions for each Dim7 chord and each are three frets apart from each other, then there can only be two other Dim7 chords between position 1 and position 2 of any given Dim7.

Take a look at the three groups of Dim7 chords:

Notice how Group 1 contains the four notes: D#-F#-A-C. Each of the four chords within Group 1 are just a new inversion of these same notes.

That means Group 2 starting on fret 2 will follow the same logic using the notes: E-G-A#-C#

Group 3 will contain the notes: F-Ab-B-D.

These are all the Dim7 chords that exist in music. There are of course other places to play them on the guitar, but these are quite easy so we’ll stick to these shapes for now.

There are many ways to use Dim7 chords, but a great place to start is by using them as passing chords.

If you play them you’ll notice they are very dissonant and create a lot of tension.

This tension allows for a “release” when you resolve the Dim7 to another chord.

A very easy way to do this is by resolving the chord up one half-step.

In terms of the chord shape in Groups 1-3 the best way to learn how to do this is to follow either the note on the 4th string or the 1st string of the Dim7 chord.

For example in Group 1 the first chord is D#dim7. The note on the 4th string of this chord is the D#. If you wanted to use this as a passing chord you would place it before any type of E chord (because E is a half-step above D#).

It could be an E major, E minor, E suspended etc.

If you were following the note on the 1st string you would be seeing the F# (highest note of the D#dim7 chord). This would resolve up a half-step to a G, meaning that you would play a G chord following the D#dim7.

The diminished sound will always resolve perfectly upward one half-step, regardless of which string you use as a guide tone.

Applying this to our previous chord progression of C-F-G-C means that we could place a Dim7 chord before some of the chords in the progression and create a lot of tension and release.

Doing this by following the 4th string would look like:

Doing this by following the 1st string would look like this: 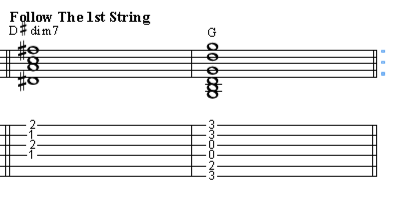 Essentially, using Dim7 chords as passing chords comes down to planning ahead.

Knowing what chord comes next you can think a half-step below that root note and play any diminished chord that has that note in it.

The next chord is an Fsus2? Well how about a dim7 that has an E in it? That would work perfectly.

Now, where that E is located within the chord (bass note, highest note or somewhere in the middle) will affect the sound of the passing chord, so it’s good to experiment with all four inversions.

Personally, I like to use the highest note of the chord as a guide tone, but you can be the judge.

By mixing diatonic and diminished passing chords you can really incorporate a ton of harmonic movement into any progression.

Try taking a simple song you like to play and see whether you can successfully use both diatonic and diminished 7 chords as passing chords within the progression.

The more you get used to thinking in this manner, the easier chord playing will become.