Do you find rhythm guitar to be less exciting than playing solos and cool lead guitar licks?

If so, there is probably a reason for that…you might lack the tools to make chord playing as exciting and challenging as lead parts.

By learning how to take standard chords you already know and alter or extend them using “color tones” you can take a simple chord and turn it into three or four new chords without much effort at all!

No, it’s not a magic trick, it’s simply using an existing chord that allows for a high level of alteration (such as a dominant 7 chord) and moving one note within that chord up or down by a half-step.

Dominant 7 chords are some of the most versatile chords in music because they are used to create tension. That tension is then relieved when you follow it up with a major or minor chord.

Play an A7 chord on the guitar. There is a certain level of tension you can hear, and it sounds like it wants to “resolve” by moving to another chord. That resolution chord is normally a D chord.

That feeling of tension can be heightened and prolonged depending on the type of dominant 7 chord you choose.

Remember that tension and release is what draws us to music. It is the story-arc of a song that creates a certain mood and sets the tone for melodies, vocals, solos etc.

By changing just one note within a dominant 7 chord you can create higher levels of tension which will make the resolution that much more enjoyable.

A glass of cool water is nice to drink, but it’s way more enjoyable on a hot day after going for a run.

That’s the same idea with altered and extended dominant 7 chords. A regular dominant 7 creates a fine amount of tension, but it’s a little bit vanilla…when you extend or alter that chord you get some crazy new colors and a whole lot more tension to release later.

What Is An Alteration Or Extension?

An alteration is when you have a standard dominant chord and you alter one note that already exists within that chord.

A common alteration of this chord would be taking the 5 (E) and moving it up or down by one half-step.

This alters a note that is already within the chord, and this will be the basis for what we’re discussing today.

Check out the VIDEO and TAB for more detail and several examples of how to implement this immediately into your playing.

An extension on the other hand, is when you take that same dominant 7 chord and add a note to it, thereby extending the size of the chord.

You could keep extending chords all the way to the 13, at which point you would have every note in the scale within the chord.

Alterations and extensions aren’t mutually exclusive though; you can combine them. For example you could extend a chord and then alter that extended note.

What Are Some Examples Of Alterations & Extensions?

Let’s start with alterations, we will use dominant 7 chords rooted on the 6th string.

Your standard bar chord A7 on the 5th fret will need to be reduced down to only four strings in order to make this easier to play. Ideally, when altering chords you want to have only one of each chord tone so that you don’t have to alter more than a single note within the chord.

So to simplify, we will instead play a four-string version as seen here:

The nice thing about this voicing is that it is the same as the bar chord voicing, but without the 5th and 1st strings. This puts our highest note on the 2nd string which happens to be the 5 of the chord, E.

As I said earlier, moving the 5 up or down a half-step is a great way to alter this chord, while maintaining the dominant 7 quality. It will still create tension, and it will still want to resolve, but it will be more dramatic than a standard A7.

Moving that E to an Eb will create an A7b5 and can be played fairly easily by re-fingering the chord.

The same is true if you move that E up one fret, creating an A7#5. Both of these chords are altered versions of a dominant 7 chord.

By moving that #5 up another half-step you actually get an extension instead of an alteration. In this case you would be adding a 13 to the A7, creating an A13 chord.

This A13 is spelled out as 1–3–b7–13, or A–C#–G–F#. Notice how there isn’t a 5 at all in this particular voicing? That’s because many times it is too cumbersome to play five or more notes and we must drop a note for ease of playability.

It’s common to drop the 5 of a chord (so long as it’s not altered) because a natural 5 doesn’t add anything to the harmony, and won’t be missed. 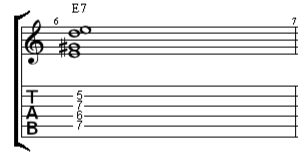 The top note of this chord is a doubled root note, E. Both the bass note and the highest note are an E and so that high E is the one we will be replacing.

This extension is fine by itself, but altering the extension creates a huge amount of variety for this E7 chord.

Just as we did with the A7 alteration, we will alter the highest note of the chord, which happens to be the extended note F#.

Flattening that note to an F gives us and E7b9, while sharpening it gives us an E7#9. Once again we are just moving that upper note either down or up by a half-step.

Check out all four chord shapes for this E7:

Notice how the high note simply moves up in half-steps from the doubled root, four frets higher to the G?

If you were simply playing an E7 chord, you could theoretically play the lower three notes (1–3–b7) and move that upper note as you play to create a chord melody or increase tension, all while maintaining the E7 harmony.

These concepts of extensions and alterations can be taken much farther by incorporating them into various inversions of dominant 7 chords, and also through the use of larger extensions.

This is really just the tip of the iceberg but should show you that instead of simply strumming a boring old E7 chord, you could actually play a large variety of E7 extended/altered chords to make rhythm guitar playing more exciting.

Not only that, but these new color tones will allow for much more interesting melodies and are hugely useful for songwriting and lead playing. Targeting these altered and extended notes within a lick or melody should be a goal of yours while practicing & playing over these types of chords.

There is no reason any guitar playing needs to be boring or dull, simply expand your tool kit and watch yourself come alive as you wield these new sonic weapons!