Have you tried to learn the notes on the fretboard, only to be continuously disappointed?

Does it seem like you’ll never be able to look at the fretboard and have it all “make sense?”

If so, there is one thing that will drastically improve your fretboard knowledge…Reference Points

A reference point is simply a note on the guitar that you know by heart and can easily locate any time. From there you should be able to figure out another nearby note using the initial one as a reference.

For example, you probably know that the open 6th string is an E. Using that as a reference it should be fairly easy to discover that the first fret is just the next note in line…F.

For this you will need to know the musical alphabet (which notes have sharps/flats and which don’t.)

What Are Good Reference Points?

Assuming that almost everyone knows the open string names, that is obviously one very good reference point, but there are a couple more important ones.

However, learning the notes on the 5th fret and 7th fret should be a top priority.

The reason these are excellent frets to memorize is because they are approximately half way across the fretboard.

If you know the notes of the open strings and all the notes on the 5th fret then presumably you should be able to quickly figure out any note between those two reference points.

The same is true for the 7th fret and 12th fret.

The 5th fret is usually fairly simple to learn because many players learn to tune by ear using the 5th fret.

Hitting the 5th fret 6th string and then playing the open A string will produce a unison note…they are both A notes. This method of tuning by ear is simplistic and effective.

5th fret A string and open 4th string are both D notes… the same is true for all strings on the 5th fret except for the open B string.

When playing the open B string, you can’t use the 5th fret G string because the tuning of those two strings is different than the rest, instead you must use the 4th fret for this pair.

Other than that, the 5th fret notes are all identical to the following open string.

So, maybe you were able to memorize the 5th fret notes from the tuning drill, and you already know the notes of the open strings, but you’re having trouble memorizing the notes on frets 1-4.

No worries, there is an excellent method to help you solve this problem.

By learning your octave shapes, it massively reduces the amount of notes you need to learn because the same note can be found on another note and string.

By knowing your octaves you can very easily use a note that you do know to find it’s identical counterpart one octave higher.

Now where is the octave above that note? And no, it’s not the open 1st string (that’s too easy, there is a fretted note somewhere within frets 1-4, on the strings between those two open E notes.)

The answer is on the D string 2nd fret. Play them both together and you’ll hear that octave.

This pattern is immensely useful because many of us learn the 6th string notes from playing bar chords.

Using that 6th string as a reference we can apply this octave shape to find the same note on the D string.

Now we have two reference points we can use to find a neighboring note!

What About All The Other Strings & Notes?

Lucky for you there is a fantastic exercise that can teach you all of your octave shapes very easily. It also has the enormous benefit of teaching you the notes on frets 1-4! 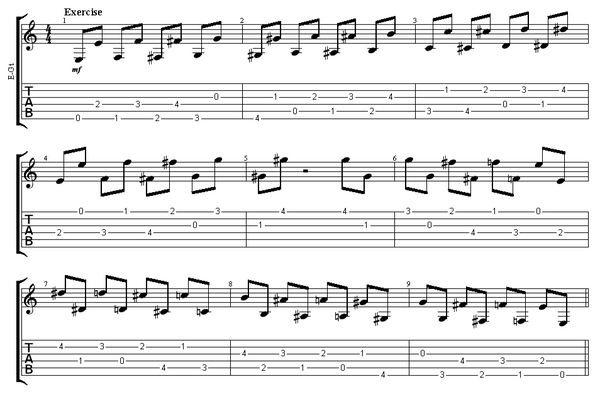 Check out the VIDEO and TAB for this exercise here.

Notice how there is more than just one shape of an octave?

There are in fact, several shapes, and learning them all will allow you to quickly have a reference point anywhere on the neck.

The first three are the same shape; they are skipping a string and skipping a fret from the lower note to the higher one.

The next shape actually skips two strings and two frets, although in this one the higher note is actually on a lower fret rather than a higher fret as in the first shape.

Take a look at the first two notes of measure three. Now compare that to an open C chord.

That’s right! The lower note is the root note of the chord: C. The upper note, you may not have known this before, is also C! It’s the higher octave in fact.

If you take just those two notes and slide them up anywhere along the fretboard this will remain true.

Many players know that the A string 7th fret is an E. If you play that note with your ring finger than you should easily be able to find the E octave on the B string using this “C chord” octave shape.

The combination of having multiple reference points across the neck is what allows players to begin to recognize the notes more easily. Relating an unknown area of the fretboard to an area that you know well is how you can go from not knowing where any notes are to knowing them all.

By having reference point on the 5th, 7th and 12th frets you are minimizing the amount of space you need to memorize because if you are between any of these location you can simply relate where you are to your nearest reference fret.

However, as a backup, learning your octaves can reduce the time it takes to learn this “in-between” space.

You’ll be surprised at how quickly this takes hold if you practice it regularly.